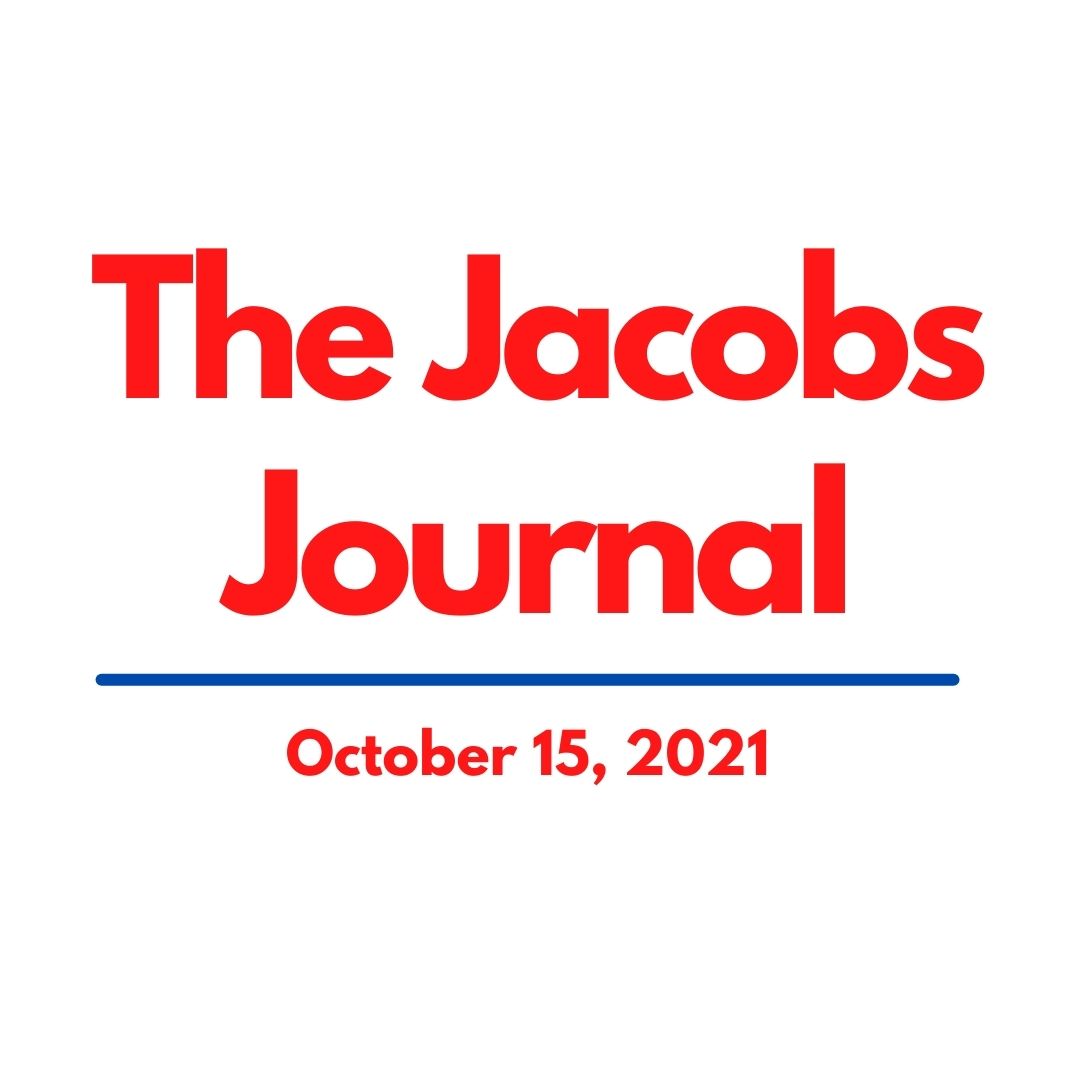 The Illinois House and Senate will return to Springfield starting Tuesday next week for the first of two weeks of the 2021 Veto Session of the 102nd General Assembly. There has been a lot of speculation about what legislation may come up for a vote while lawmakers are in Springfield. Listed below are my thoughts on possible legislative action on two major issues, parental notification prior to abortions, and changes to the Healthcare Right of Conscience Act.

Also, Democrats released newly drawn Congressional maps on Friday. I’ve got my reaction to this news and much more in this week’s edition of The Jacobs Journal!

The Illinois General Assembly will convene on Tuesday, October 18, with a congressional redistricting map likely the focus. In addition to redistricting, issues of violent crime, COVID-19 mandates, and the State’s increasing debt load will continue to be issues of concern for House Republican members. We must also address the nearly $5 billion debt owed by Illinois’ Unemployment Insurance Trust Fund.

Possible Repeal of Parental Notification prior to Receiving Abortion, other Major Medical Services

There is much speculation that Illinois Democrats will work to pass legislation to eliminate the requirement that health care providers notify the parents of minor children prior to receiving an abortion or other major medical procedure.

Current Illinois law requires parental notification prior to any major medical procedure, including abortion. Illinois already has some of the loosest restrictions of any state in the country for who can get an abortion, when someone can get an abortion and taxpayer funding of late-term abortions. I strongly and unwaveringly oppose this idea and will be voting NO on any attempt to further remove parents from health care decisions involving their children.

For over a year and a half now, Governor Pritzker has refused demands by Republicans that he work with the legislature to manage the State of Illinois’ response to the COVID-19 pandemic. The Governor has been successful in fighting back legal challenges to his emergency power and authority in most, but not all cases. Illinois’ current Healthcare Right of Conscience Act is seen by the governor as a hurdle that stands in the way of him being in absolute control of your healthcare decisions.

In light of Governor Pritzker’s vaccine mandates for school teachers, some individuals have filed lawsuits citing the 1998 Healthcare Right of Conscience Act and a provision in the law that allows exemptions from such mandates citing religious objection.

The HCRCA prohibits “all forms of discrimination, disqualification, coercion, disability or imposition of liability upon such persons or entities by reason of their refusing to act contrary to their conscience or conscientious convictions in providing, paying for, or refusing to obtain, receive, accept, deliver, pay for, or arrange for the payment of health care services and medical care.”

The Governor has indicated he would favor eliminating or changing these protections. It would take a new law being passed in order for the governor to get his way. The potential move is seen as a way for the Pritzker Administration to protect its right to mandate health care procedures and vaccines to aid in its defense in pending lawsuits. The governor may ask supermajority Democrats to give him legal cover by changing the law. Even more disturbing would be the legislature giving over even more power to the Executive after 19 months of endless rule by Executive Order.

This would also be the first time the legislature has weighed in on changes to any laws governing the COVID-19 pandemic medical and public safety response. For the first action to be to capitulate more power to JB Pritzker would be a severe infringement on individual rights for all Illinoisans.

Federal Congressional districts in the State of Illinois would look a lot different for the next ten years if the most recent draft of new maps stays in place. Illinois House and Senate Democrats have released new drafts of US Congressional district maps that would be in effect after the November 2022 elections when a new Congress is seated in January 2023. The new draft maps draw together two Republican incumbent members of US Congress and would create a geographically massive new district in Southern Illinois.

I firmly believe that Illinoisans are growing weary of the heavy-handed political tactics used by Springfield and Washington Democrats to ensure their political power.

Illinois Democrats’ overall goal seems to be the complete and total obliteration of the Republican party using the map-making process. This is quite simply an all-out effort to protect Nancy Pelosi’s Speakership. Washington Democrats’ policies have opened our borders to criminals, drug dealers, and human traffickers. Prices of everything are skyrocketing due to Joe Biden and JB Pritzker’s unworkable and outrageous energy policies. Our standing in the world has dropped significantly after the debacle in Afghanistan, and Democrats are hoping Illinoisans are so distracted that they will not notice this extremely gerrymandered map. The people of Southern Illinois should know that Democrats in Illinois are working for JB Pritzker, Joe Biden, and Nancy Pelosi, not for you.

Votes on the newly proposed Congressional district maps could happen as early as next week, as the Illinois House and Senate will return to action in Springfield on Tuesday for the 2021 Veto Session.

The gerrymandering is plain to see. The process to get to this point has been Democrats once again working on a purely political basis behind closed doors and once again ignoring pleas from independent advocate groups for greater independence and transparency. You can view the newly proposed Congressional maps by clicking here

I recently had the privilege of honoring the Kelly family at Giant City. I along with Reps. Dave Severin and Patrick Windhorst met at the Lodge to present them with a House Resolution recognizing their 40 years of service to thousands of guests from all over the world. The Kellys are a class act family that exemplify Southern Illinois hospitality!

I want to take a moment to wish Saluki Nation a very Happy Homecoming! There have been Homecoming events all week that culminate on Saturday with the Homecoming parade and football game! I am so proud to represent Southern Illinois in Springfield, and I’ve been watching with great excitement as the Saluki football team has vaulted all the way to a #4 ranking in the most recent FCS college football poll while riding a four game winning streak!

To learn more about all the Homecoming festivities, please visit: https://homecoming.siu.edu/