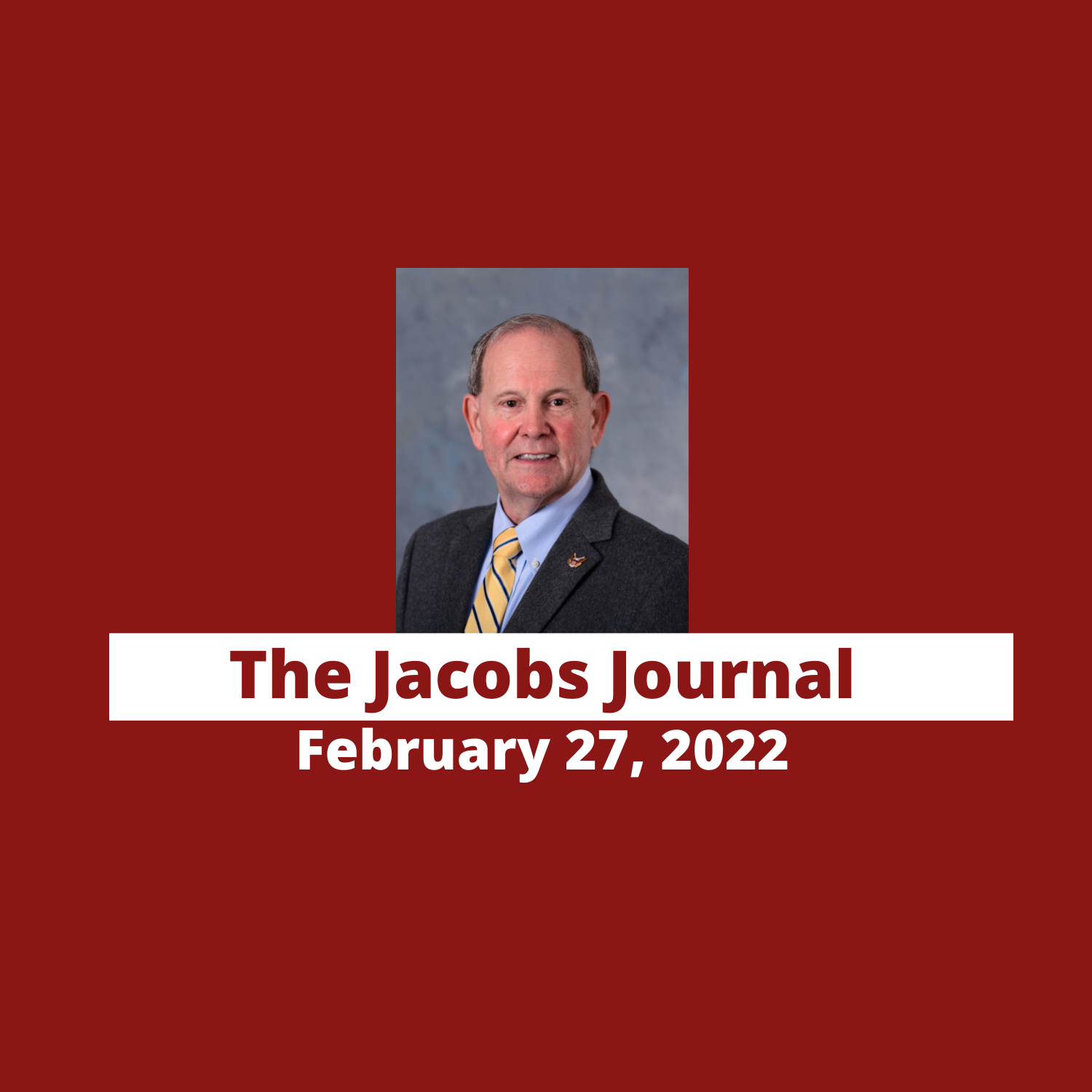 The Illinois House of Representatives’ Spring 2022 Legislative Session is entering its busiest phase since the year began. This week, dozens of House bills moved from 2nd to 3rd reading in preparation for next week’s deadline to move bills out of the House and to the Senate.

House Republican Leader Jim Durkin was in Marion this weekend to join a roundtable discussion with law enforcement officials and my colleagues State Reps. Dave Severin and Patrick Windhorst.

There was also a significant number of bills that passed the House. I am happy to report that an initiative I’ve been working on for more than a year aimed at curbing a growing and problematic crime earned unanimous House support and now heads to the Senate. I’ve got details on these topics and more in this week’s edition of The Jacobs Journal!

The three House GOP members have sponsored legislation in the 2022 Spring legislative Session that would repeal a controversial law named the “SAFE-T Act, legislation signed by Governor JB Pritzker in February 2021 that Durkin, Severin, Windhorst, and Jacobs say hampers the ability of law enforcement to do their job and provides benefits to criminals of all kinds.

Rep. Dave Severin (R-Benton) is the House Republican ranking member on the House Judiciary Criminal Law Committee. Severin is a SAFE-T Act repeal sponsor, and has introduced legislation that would restore the death penalty for criminals that murder police officers.

“I voted against the Democrats’ defund and disarm the police bill in 2021,” Severin said. “Democrats dropped a bill at 3 a.m. on the final day of the last General Assembly that radically transforms policing and criminal justice laws in our state, and the impact has been devastating for law enforcement and public safety so far. I am thankful to Leader Durkin for joining with Rep. Windhorst and Jacobs and I to discuss how this harmful law is affecting our police officers and State’s Attorneys, and what we can do about it until such a time that the law is repealed.”

State Rep. Patrick Windhorst (R-Metropolis) says law enforcement officials in his district have been vocal about their concerns for not just what has already gone into effect, but what is still coming as part of the long-term implementation of the SAFE-T Act. Windhorst was one of only two House GOP members that were allowed to ask questions on the sweeping legislation before Democrats cut off debate.

“What I’m hearing is criminals feel more emboldened not only to offend, but to reoffend in many cases,” Windhorst said. “We see it in daily news reports, crime is up, drug crimes are up, and violent crimes throughout the state are up. Murders and carjackings in Chicago have risen to their highest levels in decades. Being with law enforcement in our communities to hear their concerns, and to discuss meaningful changes to how we treat our police officers and especially how we handle the issues of drug and violent crimes is invaluable. The biggest concerns we heard were in regard to the coming end of cash bail for crimes of all kinds, including violent crimes, and the possible end qualified immunity that protects the personal financial wellbeing of law enforcement officers are at the top of the list of concerns. Leader Durkin and my colleagues on the House Republican side are committed to taking action to address these concerns.”

State Rep. Paul Jacobs (R-Pomona) was not yet sworn-in to office on the day of the SAFE-T Act’s passage, but he was seated on the floor of the Bank of Springfield Center as Democrats that controlled the 101st General Assembly sped through a last-minute process to get the bill passed.

“I got a lesson in how Springfield really works before I had even taken the oath of office,” Jacobs said. “Democrats cut off debate, then held the roll-call open while they worked their fellow Reps. to join on in support of passing the bill. There were some reluctant people that voted yes, and I think in the last year as crime has jumped significantly throughout the State of Illinois, we understand why. I’m sponsoring legislation that would roll back these damaging changes and restore respect to our police and law and order to our state.”

“After months of reading through various news and police reports and gathering information from individual meetings I have had with constituents, I decided action was needed to curb the theft of catalytic converters,” Jacobs said. “This crime has become a growing problem throughout the State of Illinois,” Jacobs said.

“The places that have been most hurt by these theft rings have been schools, daycares, and churches,” Jacobs said. “It is a sad fact that we must address these crimes, as criminals have little regard for the harm they are doing to institutions that provide educational and charitable services to children and adults that need help with transportation. We’ve cleared one hurdle in the House, and now I look forward to this bill passing the Senate and being signed by the Governor.”

Illinois House Republicans Stand with the People of Ukraine.  While Russian troops move into Ukraine, an act of war the likes of which has not been seen in Europe since 1939, House Republican Leader Jim Durkin has introduced legislation to send a message to the Ukrainian people that Illinois supports them and will not do business with these vicious warmongers.

“This morning, we woke up to shocking images crossing our TV screens. People in cities throughout Ukraine huddled in subways and shelters while explosions shake their cities as Russian soldiers begin an invasion of their homeland,” said Durkin. “Today, we must send a strong signal to these people that we stand with them and support their sovereignty – that the State of Illinois is prepared to do what we can to help.”

Durkin’s legislation would require Illinois to divest of any pension funds in Russian companies and prohibit the state’s treasury from holding any Russian assets.

This week’s court proceeding marked the fourth time in six weeks that a judge has held Director Marc Smith in contempt of court.  Smith, an appointee of Gov. Pritzker, is the head of the Illinois Department of Children and Family Services (DCFS), the State agency with placement responsibilities over children and juveniles who need care.  A series of laws and consent decrees place a hard mandate upon DCFS to provide adequate placements for all children assigned to its care.  Each of these four contempt holdings is the results of a court finding that Smith and the Department have ignored these mandates with respect to at least one individual child or juvenile.

At the heart of the most recent contempt holding is the case of a 16-year-old girl.  A recent patient at a psychiatric hospital, the juvenile has multiple foster-care challenges and needs.  DCFS is required by law to find a stable foster care setting for this person, and the setting has to have multiple resources in place to meet her individualized patient requirements.  The Department’s records, however, presented this week pursuant to an order of a Cook County juvenile court judge, showed the girl had no foster home and had been moved around 25 times since September.