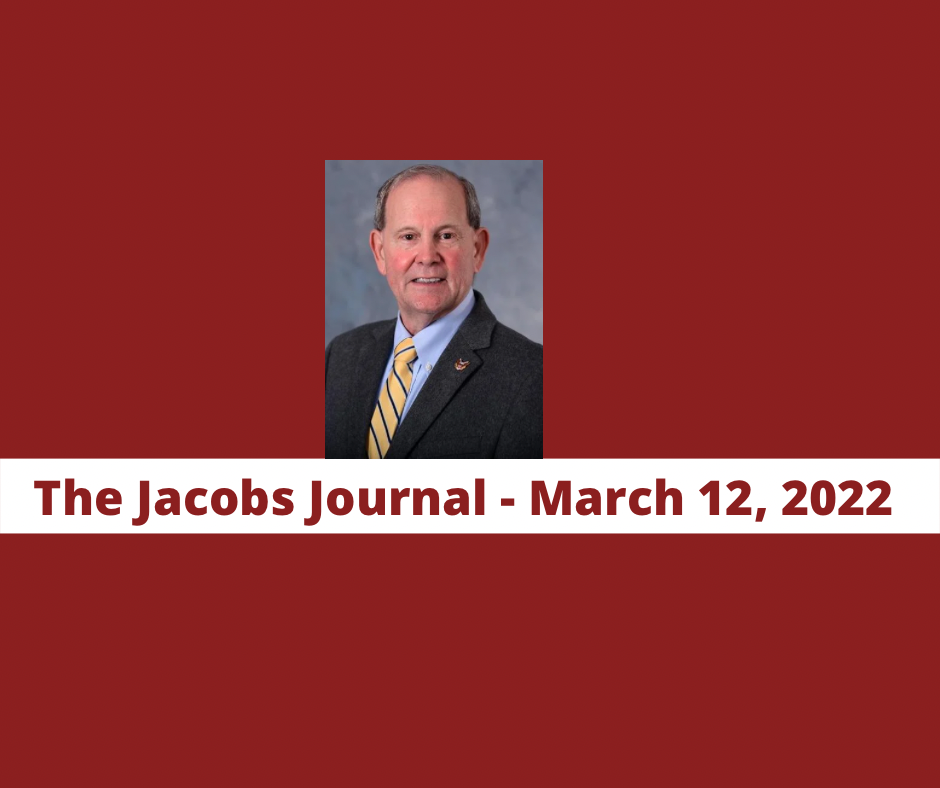 With very little time remaining in the shortened Session schedule for this year, the House returned to Springfield for what turned out to be a mainly Committee-heavy week. Lawmakers did take to the floor for hours the previous week, where I was proud to join with one of my colleagues on the other side of the aisle on a bill targeting catalytic converter theft rings. I’ve got information on that, news on former Speaker Mike Madigan’s arraignment on Federal charges, an in depth look at rising crime and the lack of action by House Democrats, and more in this edition of The Jacobs Journal! There are just three weeks left of the regularly scheduled Spring Session of 2022. Stay tuned to this page for updates as we draw closer to the April 8 scheduled adjournment date, and thank you, as always for reading!

SPRINGFIELD, Ill. – Alarmed by the rise of catalytic converter thefts around Illinois, State Rep. Dr. Paul Jacobs, R-Pomona and State Rep. La Shawn K. Ford, D-Chicago have advanced legislation that will make it difficult for thieves to sell stolen parts for cash at scrap metal recyclers without creating a paper trail that can prevent the crime in the first place.

“I sincerely appreciate Rep. Ford’s leadership and the bipartisan cooperation he offered to address this problematic rising crime,” Jacobs said. “It’s a sad fact, but we must address this issue. Catalytic converter thieves have shown little regard for the harm they are doing to individual vehicle owners and institutions that provide educational and charitable services to children and adults that need help with transportation. This legislative package offers strong deterrents for people thinking they can make a quick buck by stealing catalytic converters and companies that might offer thieves cash for stolen converters. I look forward to this bill passing the Senate and being signed by the Governor.”

Ford and Jacobs’ House Bill 107 targets the incentives of catalytic converter theft by requiring scrap yards and metal recyclers to review and record the identification of sellers. If a seller does not have a Secretary of State-issued license identifying them as an automotive parts recycler or scrap processor, the seller will be required to fill out a 1099-MISC tax form by the buyer. If a catalytic converter is valued at more than $100, buyers would be prohibited from paying in cash.

“We’re trying to stop criminals from cashing in on this theft,” Ford said. “Right now, it’s too easy for someone to steal a catalytic converter and then take it to a scrap yard for some easy money, no questions asked. This proposal is going to require these bad actors to identify themselves, and I think that’s going to make them think twice.”

“This is a bipartisan solution that will help law enforcement create a paper trail that can help deter or solve crimes,” Ford said. “This bill will help protect innocent car owners who are unfairly being targeted. I appreciate Dr. Jacobs’ leadership on this topic, and encourage the Senate to pass this as soon as they can,” Ford said,

Illinois State Representative Deanne Mazzochi has accused the Democrat majority of not just being soft on crime, but creating state and local policies that allow crime to thrive.

Carjacking, burglaries, and retail thefts are on the rise in her district. Murders, robberies and gang violence are threatening other Chicagoland communities. And Democrats in Illinois won’t tackle the problem. They are comfortable sitting back while Illinois families endure violence in their neighborhoods with little recourse because Democratic lawmakers have refused to make laws to protect them.

According to Mazzochi, the Democrats in control of the committee tasked with hearing crime prevention legislation have focused on bills dealing with the rights of prisoners, criminal record expungement, and expanded parole, while ignoring a great number of bills targeted at combating crime.

Representative Dave Severin, the ranking Republican on the committee hearing criminal justice bills, agrees with Mazzochi’s assessment. He believes the prohibition of new public safety laws coupled with the recent passage of the Safe-T Act is fueling the violence and increased crime rates across the state. Many of the provisions in the Safe-T Act hamper the ability of law enforcement to do their jobs and at the same time it had made it easier for criminals to avoid prosecution, keeping them on the streets doing harm.

State Representative Patrick Windhorst, an experienced prosecutor, says law enforcement officials in his district have been vocal about their concerns, especially about ending cash bail that is part of the Safe-T Act. Windhorst filed legislation to repeal the Safe-T Act citing the need to curb rising crime rates, but his legislation was not permitted a public hearing by the Democrat majority.

For all but two of the last 37 years, Democrats have held the majority position and thus control the Illinois House of Representatives. They decide what bills are sent to committee and whether or not those bills actually receive a public hearing.

In recent years, the new Democrat leadership has found it necessary to flex their muscle in the General Assembly by refusing to let bills combating crime see the light of day. Their reason? Because they can. Time and time again they have cited “majority rule” as the rationale for blocking bills that would keep Illinoisans safe.

Just because they can, doesn’t mean they should. Public hearings equal transparency and accountability. So when Democrats prevent legislation from receiving a public hearing they are purposely keeping Illinoisans in the dark. Legislation should go through rigorous debate with input from experts, proponents and opponents. Only after that should the majority play its upper hand, voting to pass or kill a bill. Keeping legislation from public debate is tyranny, not leadership.

The Democrat majority has gone too far and Illinois residents are paying for it.

Former Speaker arraigned. The longtime head of the Democratic Party of Illinois was arraigned this week on a 22-count federal felony indictment. The indictment leveled charges of racketeering and wire fraud against the former Speaker of the Illinois House. The charges are related to an alleged pattern in which former Speaker Michael J. Madigan is said to have weaponized his legislative leadership and political party leadership in the interests of his law firm and close associates.

The former Speaker was not required to be present in person for his arraignment, and did not speak on the phone call that carried out the court procedure. Madigan’s arraignment was a procedure that officially acquainted him and his lawyers of the charges against him, and granted him standing as the defendant before a court of law. The former Speaker will now be granted time to study the charges against him, and to select a strategy for his criminal defense.

Reporters ask about former Speaker Madigan’s campaign money. The indicted former political party boss has a campaign fund of almost $10 million, much of which he can spend for his criminal defense. Millions of additional dollars were raised by Speaker Madigan and given to other Illinois politicians, many of whom are still in office. Reporters are asking questions about who received Madigan money, how much, what times the moneys changed hands, and what sorts of “key votes” on Illinois’ policy and future were taking place at the time these dollars where changing hands.

Spring flooding season begins. With snowmelt and heavy March rains comes the likelihood of flooding for many Illinois homes and farms, especially those located on clay soil or in bottomlands and floodplains. In the first week of March 2022, authorities had already published flood warnings for stretches of the Big Muddy River, Illinois River, Kaskaskia River, Ohio River, and the Wabash River. As March continues, these flood warnings will multiply as many Illinois rivers and streams lap at, or overflow, their banks.

Floods not only slow down spring farm work and close rural roads; they also damage property. The Illinois Emergency Management Authority (IEMA) maintains a webpage with useful public information about statewide flooding incidents. The webpage not only distinguishes between different levels of statements and warnings, but also contains information on how Illinoisans can act before, during, and after a flood to maintain safety and limit property damage. It is important to keep in mind that local water waste disposal infrastructure may be compromised in flooding incidents, so overflow waters should be treated as potentially hazardous.

ENERGY and the HIGH PRICE OF FUEL

“This is not a partisan political issue but is actually a national security concern for our country and a real concern for all of the families and seniors on fixed incomes who are struggling every day with rising gas prices,” commented Rep. Dan Swanson. “Whether you’re a farmer planting crops, a trucker hauling our goods, or a business owner providing services, we need to act on this energy independence problem immediately and it should be a priority for the federal government.”

The home production of oil and natural gas is closely tied to federal policies and much of the U.S. oil and gas that is yet to be pumped comes from federal lands and waters in the Rocky Mountains, the Great Plains, the Gulf of Mexico, coastal California, and Alaska. HR 719 points out that the price of motor fuel, at the pumps where Americans buy it, is approaching the record-high price set in 2008.

In this time of grave national uncertainty and economic and military threats, it is urgent that we achieve true energy independence in the United States of America. To achieve true energy independence, we need to maximize the production of American energy, including energy from U.S. federal lands, as well as reducing barriers to the construction of infrastructure to pump, deliver, and refine energy.

SPRINGFIELD – State Rep. Paul Jacobs (R-Pomona) says he is not surprised by Wednesday’s indictment of former House Speaker Michael Madigan on federal racketeering charges, and urged his Democrat colleagues in the Illinois House to enact sweeping reforms to prevent a future Madigan-style reign.

“Speaker Madigan consolidated the most power for the longest period of time of any politician in the history of the State of Illinois. They say power corrupts, and absolute power corrupts absolutely, and I believe that is what was revealed by the US Attorney’s office upon news of today’s indictment. Corrupt politicians using public office for personal profit is not new in Illinois, and today’s indictment reveals allegations that Speaker Madigan was working not for public service, but for self-service. These allegations are disturbing, and underline the urgent need for the Illinois General Assembly to enact strong and sweeping anti-corruption reforms immediately. I hope my colleagues on the Democrat side of the aisle, those that aided and abetted Speaker Madigan’s political reign are paying attention, and that they join me to pass badly needed ethics reforms to prevent this kind of corruption from overtaking our state ever again.”

Don’t forget to spring ahead one hour Saturday night.

Illinois will observe daylight time, with clocks one hour ahead of standard time, until the first Sunday in November (November 6).  All 102 counties in Illinois observe Central Standard Time and Central Daylight Time.  This marks a major difference from the neighboring states of Indiana, Kentucky, and Michigan, in which different counties within the state are in different time zones.